The monologue form can be dated back to the Ancient Theatre of the Greeks and Romans, where it had many uses as a prominent theatrical device. Indeed, in the works of Roman Comic Playwright Plautus, the monologues averaged 17% of the total verses-quite a change from the trend of realism that permeated the modern stages of 19th and 20th centuries!

The concept of the monologue and soliloquy flourished in Shakespearean drama, however few can distinguish one from the other. A soliloquy is essentially a single character talking to themselves about their situation (hence the Latin etymology solus [“alone”] and loqui [“to speak”]). Contrastingly a Monologue (which derives from the Greek monos [“single”] and legein [“to speak”]), features an implied audience which the performer can engage with. Shakespeare dealt with both; his most famous soliloquy being Hamlet’s “To be or not to be”, and a notable monologue is Marc Antony’s proclamation from Julius Caesar “Friends, Romans, countrymen, lend me your ears”

Similarly, the dramatic device of an ‘aside’ flourished in both Shakespeare’s work and 18th century Melodrama as a means for the villainous character to inform the audience of their Machiavellian schemes (see Iago in Othello for a classic example of this).

Solo performances tend to take a confessional style, and, in the right theatre, can make it feel like the character is directly addressing you. This sense of intimacy and trust was demonstrated very well by ATYP’s recent production of ‘The Voices Project- All Good Things’.

‘All Good things’ marks the sixth and final showcase of ATYP’s Voices Project- A series of monologues written and performed by young, emerging artists. This production, directed by Iain Sinclair ended its six year run featuring a composition of works that explored the varied experiences of 17 year olds in Australia today. The piece was weighed down by fixable technicalities; though overall ‘The Voices Project’ has ended strongly in an engaging and versatile production.

Iain Sinclair attempted to differentiate himself from the 2015 production, directed by Sarah Parsons, by cutting the monologues into episodes/scenes, instead of having them run straight through. This intended to interest the modern day attention deficit audience by constantly ‘changing the channel’ (after all, a poorly done 7 minute monologue, can quickly disengage an audience). However this was counter-productive, causing frustration and disengagement if the scene changed from a fascinating monologue to a slow-paced, one.  Furthermore the changes didn’t always transition smoothly-the equal fault of directing, writers and performers. Most of the writing simply wasn’t suited to being chopped and changed. By cutting the drama, the scenes either lost the tension built over the scene or simply resulted in a disjointed and confusing narrative. 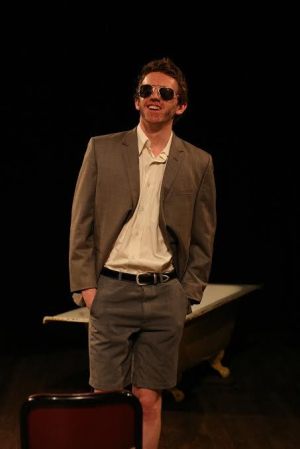 The only monologue which really suited the ‘episodic’ style was the comic piece, ‘The Fuzz’, which worked purely because the narrative required the actor to enter and exit over a period of time, with each reoccurrence representing a new day (also known as a ‘Linking Monologue’).  However, this chopping style also worked for monologues where the suspense developed gradually. One of the production’s strongest monologues was ‘Changing Rooms’, a confessional exploration of a Transgender male’s identity in an
unaccepting world. Here the interest was slowly built as the writing diverts from shoplifting to his deep desires to fit in. Only in the final segment did the tension rapidly build, and thus the constant cutting kept you wanting more. Contrastingly in ‘Coast’, the writing, although obscure, would rapidly climax in an imagery-rich captivating ethereal catharsis, before jarringly swapping to a light-hearted monologue, leaving the audience unsatisfied and confused. 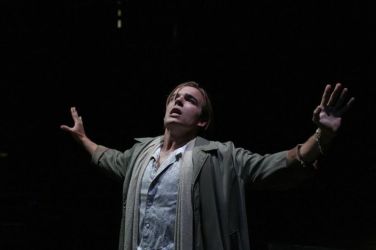 The set, costume and lighting design all helped shape the authenticity of the stories on stage. The lighting, designed by Emma Lockhart-Wilson artistically contextualised each scene, from the harsh orange of the arid country landscape, the blue hues of the coast or the pulsing energy of city nightlife. The costumes were realistic teenage outfits, and provided a subtle reminder of the authenticity of these narratives. The set design was well-done by Emma Vine and illustrated the variety of subject matters explored in this production. In 2015, large set pieces such as a jungle-gym were used in different ways for each monologue. In contrast, this year each monologue had a single prop or set piece which was used as a setting to the narrative of the monologue. An eclectic range of props littered the stage, from a floating meringue, to a large tree branch, to a dripping tap filling a bathtub. This was an engaging technique as the props allow the different monologues to be constantly in the mind of the audience. The appearance of these props, when timed well, greatly advanced the storyline.

This engaging method of presenting the monologues, breaking and destroying the fourth wall, echoes with evidence of Bertolt Brecht’s estrangement effect, which sought to emphasise the constructed and fictional nature of theatre. This method prevents audiences from passively accepting or enjoying the events of a play, but requires them to engage with and analyse the events from an objective perspective. Brecht describes the ‘distancing effect’ by the way an “artist never acts as if there were a fourth wall besides the three surrounding him. He expresses his awareness of being watched.” (Willett 91). This explanation allows clear similarities to be drawn between The Voice Project and Brecht’s theory.

Furthermore, Director Sinclair’s decision to cut the monologues as the tension and interest builds is also consistent with Brecht’s style as the cuts act as a jarring reminder of the artificiality of the theatrical experience.

The young cast each gave authentic and varied performances, although some were hindered by their inexperience. A lack of dramatic experience was evident in ‘Teeth’, where Darius William’s delivery of comic lines often fell flat.  Other vocal-projection issues include Simone Cheuanghane in ‘Scrub’, who ended several segments on an upward
inflection which confusingly implied there was more to the scene. Furthermore many performers were disadvantaged by ambiguous or poorly written scripts, such as ‘Coast’, ‘Scrub’, ‘Red Bull’ and ‘Bright’. In ‘Red Bull’, May Tran was absorbing as derisive and
anxious HSC student. However, the authenticity of this piece was lost as the script descended into unrealistic melodrama as she commits suicide mid-exam.

Some stronger performances include an aspiring beard-wearer (Jonas Thompson) who conspires with the local joke-shop owner to ‘grow’ a beard using novelty products. Here the comic timing was handled with skill, the costumes greatly increasing the amusement of the visual-gag as Jacob returns with bigger and faker facial hair in each scene. Sarah Meacham gave an engaging performance as the naive girlfriend in ‘Nice’. Her piece was funny and thought-provoking in her tipsy colloquial teenage drawl. Simon Croker was captivating and powerful in ‘Coast’ despite the dramatic impact being undermined by an ambiguous narrative. Moreblessing Maturere delivered bravado and vulnerability in the provocative ‘Changing Rooms’ while Poppy Lynch personified wide-eyed innocence in ‘Bright’, an ambitious narrative of a young girl discovering her sexuality.

The ten writers together delivered a varied and engaging representation of the teenage experience, though many needed to be clearer about context and storyline. ‘Scrubs’ was the weakest piece due to the frustrating ambiguity of the writing in a narrative could’ve just as easily been about abusive incest as her father’s secret love affair. In contrast, some pieces were excellently developed, creating an authentic character voice and an interesting storyline.

All Good Things was an engaging and stimulating composition, ending ATYP’s The Voices Project, with energy and flair.