This show was on at the Sydney Opera House Studio on the 9th of February 2017.

If you were to accidentally walk into the Sydney Opera House Studio any night this month, you may be alarmed at what you find. If you are a seasoned theatre-goer looking for some Shakespeare or Chekhov, you will be looking in the wrong place. At any given moment over the 80 minutes of Cirque Alfonse’s Barbu, one may find gyrating men in budgie smugglers, vodka shots and more than one instance of flat-out nudity. It’s sweaty, sexy chaos and it couldn’t be further from your traditional popcorn and elephant circus.

Not wanting to scare away audiences with its edgy eccentricity, Barbu starts quite traditionally. Everyone is (initially) fully clothed, albeit scantily clad. The roller blading choreography is edge-of-your-seat thrilling as the troupe negotiate the precariously small, circular stage.

However, just as the pace is picking up, director Alan Francoeur slows it down with some off-beat acts seemingly chosen to emphasise the show’s hipster quirkiness. A Ben Kingsley lookalike takes to the stage to perform such eccentric acts as sword swallowing with a fake head and carrying a hamster through a hoop. These interludes, although peculiarly amusing, create a stilted pace. This firmly contrasts to the second half, when the lively music and energetic performers give the show an exhilarating momentum.

There is still the usual acts you’d expect from a circus, but performed with more swagger and less clothes. There’s tumbling, an aerial hoop, acro-balance, and the juggling of a creative array of objects. But the show also makes exciting an unexpected turns into pole dancing, golf-club-balancing and a man wearing a disco-ball spinning around in a Cyr wheel. 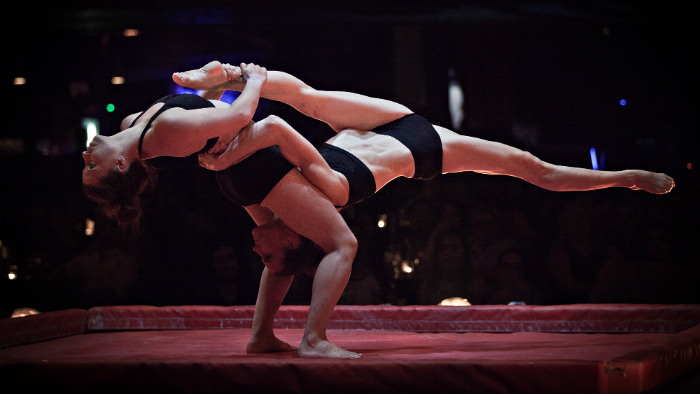 The ensemble is comprised of Jean-Philippe Cuerrier, Antoine Carabinier Lépine, Jonathan Casaubon, Lucas Jolly, Francis Roberge, Milette Jolly, Geneviève Gauthier and Geneviève Morin. Each of the performers bring a charismatic on-stage presence and thrive in the silliness of their antics.

The traditional folk Québécois music is mixed with synthesised electronic tracks by a trio of musicians (Josianne Laporte, David Simard and André Gagné). This dynamic mix of sounds perfectly capture the chaotic style of the production and provide an energetic backing to the acrobatic stunts.

A less successful technical element is the use of two large screens which project images throughout the show. The concept had potential, and there are a few hilarious moments of camp dancing which almost justify its use. However, the projections are mostly images of nature that don’t add anything to the show.

It takes a while for the show to really get swinging but once it starts, it doesn’t stop. Barbu is energetic, playful and a whole lot of fun, proving that the circus isn’t just for kids.