All-female plays aren’t very common. In fact, statistically, women in the Arts aren’t that common. The ratio of women to men in the performing arts is around 3:10, and women make up only 7% of the top directors in Hollywood. 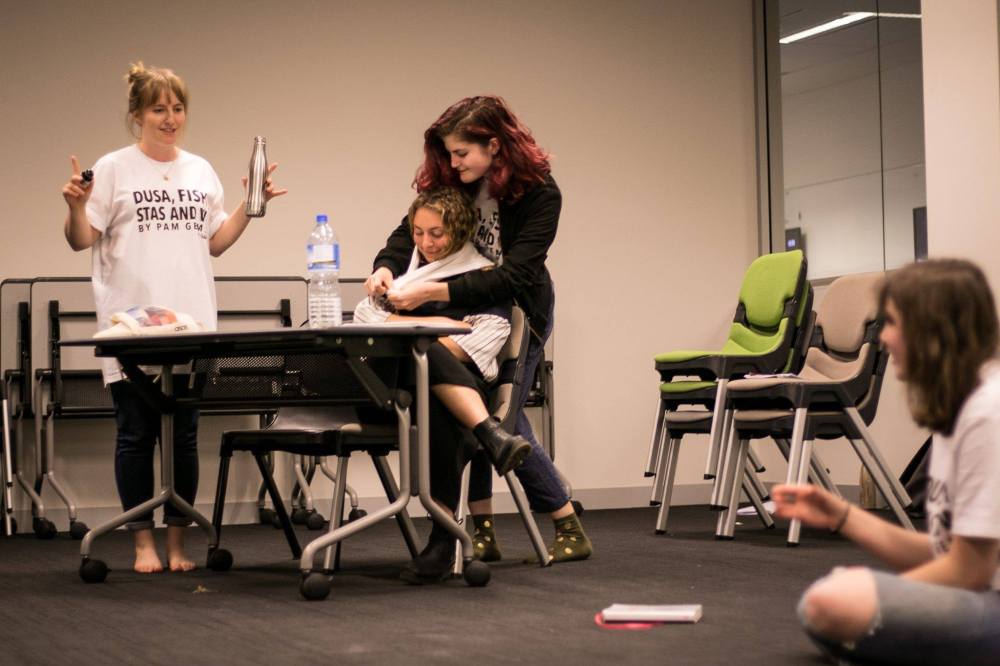 It follows the lives of four flatmates in their 20’s. Each are at different stages in their personal and professional lives. Dusa (Shnier) is a worried, recently divorced mother. Fish (Wilson) is a lawyer unlucky in love. Stas (Merilees-White) is working two jobs to study abroad and Vi (Sullivan) is struggling with her mental health.

The four-women-living-together trope is a common one in popular culture, having spawned such successes as ‘Golden Girls’, ‘Sex and the City’ and ‘Girls’. It’s not hard to see what makes it so popular. Gems’ writing is bitingly funny as the characters bicker, chastise, comfort, and joke with each other about their increasingly disappointing lives. Many issues raised in the script- abortion, mental illness, abusive relationships- still have relevance to many women today, making it a very accessible and relatable production.

The set design by William Gammel and Verónica Barac evokes a cosy, homely vibe through the clutter of items that reflect the messy intersection of these women’s lives. The music establishes both the 70s vibe, and the disheartened mood.

This is a production loaded with serious themes, however Watkins’ direction brings out the moments of humour amongst the sadness. The performers have great chemistry as an ensemble, delivery an authentic depiction of a group of close friends.

It’s the characters’ differences that make them so compelling, and the actors successfully flesh out these nuances. Shnier is devastating as the suffering mother, Dusa. Merilees-White’s Stas is a great character- sassy when need-be, but caring deep down. The mood swings of Sullivan’s Vi both makes us laugh (when she’s “on her uppers”) and pity her, when she’s too exhausted to eat or get out of bed. Fish is like that frustrating friend everyone has, always making the same mistakes while everyone watches on aghast.

It’s a funny, sad and gut-wrenching show, not worth missing out on.

This review was originally published at Blitz UNSW on the 30th of May 2017.